PALM Cay, the southeastern New Providence community, is gearing up for the launch of its “next big project” where realtors will have a “big part” to play.

Palm Cay recently announced the release of its latest real estate offering, the $100m condominium and penthouse complex named One Marina, which will overlook the marina and ocean access.

One Marina was 40 percent pre-sold before its release to the general market. Construction, according to Mr Newell, will begin in 90-120 days. “One Marina is our next big project. It’s a completely new product, with new architecture and new design,” he said.

“We’re getting ready to start our final phase of Anchorage. The first three phases have been sold out. We expect to start that in the next 90-120 days. We also have our Starfish Isle town home units near completion.”

Mr Newell added that Bahamian buyers have taken up much of the Anchorage condominiums given the price point. “There’s always been an active local Bahamian real estate market that has been been buying into the condominium project,” he said.

Palm Cay has already had 160 properties purchased since opening, with the developers investing $65m. The community covers 69 acres in total, and is located in southeastern New Providence between Port New Providence and Treasure Cove.

This story originally appeared in The Tribune. Read more here 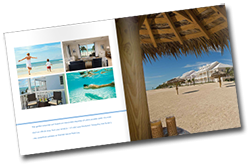 Join our ocean lovers community, sign up for our free brochure and newsletter.